From Jan-June 2017 we worked with Women in Sport and London Sport on a pilot project to encourage more women to engage in netball.

One of the main things I learnt from them were the main 6 reasons of why women engage in sport:

We planned to run an 8 week Back to Netball course and thought it would be good to incorporate this in the sessions. We would therefore be able to see what the participants motivations were and if they changed throughout the course. The pictures below are what each participant chose on their first week. 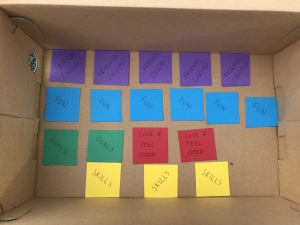 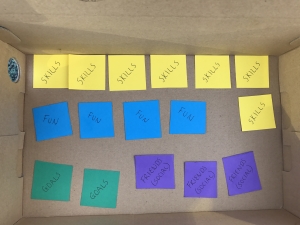 We had a good amount of players turn up for the first sessions but this wasn’t to last. After week 3 we were a bit worried about the dip in numbers and recognised that we might be missing the ‘fun’ element of the training as this was coming up on the squares. We therefore try to plan warm-ups and drills that would encourage players to laugh and interact with each more. We also started bringing sweets to the sessions. This really help player motivation haha! I think we’d mastered this by week 5 and were getting steady numbers.

We recorded the results as a group rather than individually because we didn’t want players to feel embarrassed by being labelled, which after talking to a few individuals, they felt this was the best way. It would have been good to record their individual progressions though so I’ll have a think about a good way this can be done for the next one.

A group of players went to the pub after the final night of training. As our netballers get 20% off there I think this was a good incentive for them to go and bond. I know a group of players made a whatsapp group after the first week and have been socialising outside of netball ever since – cinema trips, comedy nights, meals out and more. 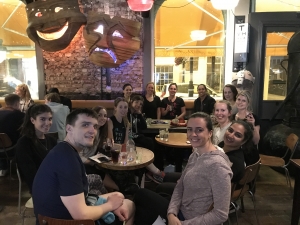 I did make a Facebook group for everyone as well. I think this helped them find each other online and form friendships. I regularly posted tips and pictures from the session we’d just done each week so if anyone missed it they could keep in the loop.

We presented them with certificates of completion in the final session which I think they all appreciated. It was a good way to celebrate their step back into netball. 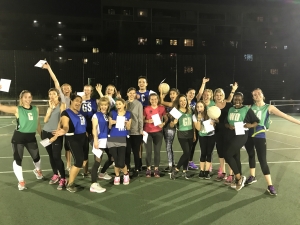 We finished the course at the end of August and I’m pleased to say that we had 2 teams form and join our leagues. They now play weekly and continue to learn from their matches.

Additionally, as part of being part of the project, we were able to recruit a new netball coach and now we can provide training sessions for existing teams. They now have the opportunity to ask questions, practice new strategies, continue to develop and therefore enjoy their netball more.

We also recruited two volunteer social secretaries to plan and lead events. They ran a rounders afternoon in the summer and this month they have run a pub quiz. It has been extremely popular so they are running another next month! Our aim when starting this project was to create a stronger community for our players and we are well on the way to achieving this! Through the online resources such as ‘Keeping Women Warm to Sport in Winter’ and ‘Good Sports: Why Sports Need To Engage Female Volunteers’ we plan to keep on top of what will keep more women engaged in netball.

Thank you to Women in Sport and London Sport for selecting us to be part of this great project and sharing your knowledge. You can view the video report of the project here.