Come and give Versatility Netball a try! 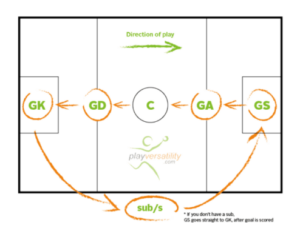 Did you know that Playnetball.com also run a 5-a-side version of INDOOR netball called Versatility Netball?  Well this is your chance to give it a go!

Versatility Netball is a fun and fast version of netball with just a couple of simple changes. Firstly, in Versatility Netball, every player switches position every time their team scores. This means that you get to play every position throughout the game. Secondly, we use basketball hoops & backboards so it’s much easier to score! If you’re new to netball, have not played netball in a while or just want to improve your all round game then try Versatility Netball.

Together with our new friends at Sportas, these sessions will allow you the opportunity to give Versatility Netball a go without worrying about league results or any kind of commitment. If you end up loving it, then we’re hoping to expand our current Versatility League with any new players keen to commit and can place you into a team.

Full details including venue, price and registration details, can be found here. You must register with Sportas in order to attend.

Come and give it a try!