We have a lot of queries about the replay rule so we thought we’d have a go at explaining it!

The official rule extracted from the England netball rule book 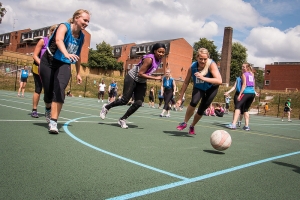 What the Replay rule actually means:

The key to this rule is deciding if the player has control of the ball or not. This makes it one of the hardest rules to call as it is subjective. The umpire has to assess the skill of the player (some players may have complete control of the ball with only two fingers where as others may not have control with a full hand on the ball). Then the umpire has to decide if they are controlling the ball or not. This decision has to be made in a split second so that the game isn’t delayed.

Umpires won’t always get it 100% correct, (especially on wet days!) but if you do get called for replay incorrectly, take it as a compliment! The umpire obviously believes you are a skillful player!!

If there are any other rules that you would like clarified, please have a chat to your umpire at the courts or email info@playnetball.com and we’ll try and clear up any confusion.