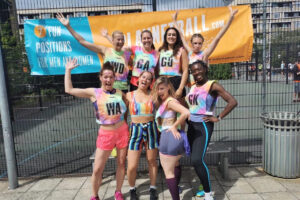 Ayshea has been working as a midwife with the NHS for 3 years, and plays in our Mixed B league on Thursdays in Highbury with the Snooty Foxes. She is a talented GD/GK and hails from Port Talbot, Wales. She joined playnetball.com after she finished studying at University in London, joining with three of her friends from her university netball team.

Why did you want to become a midwife?
To support women on their pregnancy journeys and provide safe outcomes!

Tell us a little bit about your day (or night!) working for the NHS.
I provide antenatal and postnatal care in the community during the day. I also support homebirths at night for women in East London.

What do you love most about your job?
I get to experience what is fundamentally a very important time with many different families. It’s really special.

What is the biggest challenge in your role/department?
Dealing with obstetric emergencies!

How long have you being playing netball for?
Since primary school at age 11, so over a decade now.

How do you balance shift work and playing netball?
I can’t always be there every week so I try to make it when I can. I’m always gutted when I do have to work and miss out, but my team are always understanding.

Why do you play with playnetball.com?
It helps me with my work life balance, especially after a stressful shift – having a run around makes me forget about it. I’ve made lots of good friends through playnetball too!

Best playnetball.com memory?
The PRIDE tournament last month. It was so much fun!

What sets playnetball apart from different social netball leagues?
The inclusivity and friendly environment. Everyone is so welcoming, and the social side is awesome too. 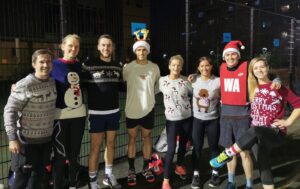 Rich has been working with the NHS for 7 years, and plays in our Mixed A league on Tuesdays in Angel for Lost and Found. Rich is a very talented GS/GK for Knights Netball and has recently been selected to represent England as part of the England Thorns. Is there anything he can’t do?

Why did you want to work for the NHS? What made you want to become a radiographer?
I knew I wanted to do a patient facing job. I really liked the overlap between being technical, using high energy x-rays, imaging and planning patients cancer treatments and also providing top quality care whilst delivering that treatment. It was the perfect mix.

Tell us a little bit about your day (or night!) working for the NHS.
It’s controlled chaos! Time flies, there’s always something to do. I manage a cancer treatment unit and we deliver external beam radiotherapy with either the intent to cure patients of their cancer or relieve their symptoms.

What do you love most about your job?
No two days (or patients) are ever the same! Every single one presents new challenges. I’ve learned more than I ever thought possible about other cultures, religions and people- even some conversational Arabic!

What is the biggest challenge in your role/department?
Time! There are never enough hours in the day. Although we see patients for several weeks of treatment we don’t know how people will be day to day, one day they might be in and out of the department within half of their appointment time – and the next they might need more support and take twice as long. So managing the workload is tricky at times!

How long have you being playing netball for? How did you get started?
A few years! Started casually at school and then some old school friends got me involved again in a mixed league. Once I found Knights Netball on social media the rest was history!

How do you balance shift work and playing netball? Luckily I have a very supportive team and we often work around each other’s hobbies and commitments.

Why do you play with playnetball.com?
It’s the highest standard mixed league in London! Had some incredible games and the netball family has always been so welcoming.

Best playnetball.com memory?
Aside from the netball – all of the socials with my team and others in the pub after games!

What sets playnetball.com apart from different social netball leagues?
It’s got a family feel to it. I’ve made heaps of new friends and you can literally talk to anyone!

How am are you balancing work with your selection to the England Thorns?
My employer has been exceptionally supportive to give me as much of the required time that I need to complete Thorns camps which have been amazing. I try to get to the gym on the (rare) days that I’m not playing netball or early in the morning of the days that I am. It’s been a real learning curve of diving my time but I really don’t see netball as something that I have to do but more as something that I love to do!